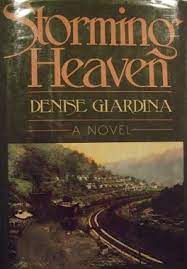 A guest article by James McDonald and David Walsh. The original article appeared at www.wsws.org/en/articles/2022/03/09/stor-m09.html

Meeting the responsibilities of historical fiction

Denise Giardina’s novel Storming Heaven (Ivy Books, 1987) is a gripping work of historical fiction set in West Virginia during the first two decades of the 20th century. It takes as its subject the rapacious conquest by coal mining companies of southern West Virginia and the courageous battles waged by miners and their families in defense of their land, their labor and their lives. The novel culminates with the Battle of Blair Mountain, which took place in the late summer of 1921.

Giardina uses four narrators to tell her story, each with an effectively distinctive voice. C.J. Marcum (“Cincinnatus Jefferson, after the two greatest men that ever lived”) becomes the mayor of the fictional town of Annadel, West Virginia. Annadel is a racially integrated community whose previous mayor was the African-American Doctor Booker. Doc Booker is a socialist who befriends C.J. and wins him to the ideas of socialism, though C.J. always falls asleep when he tries to read the books by Karl Marx that Doc lends him.

Rondal Lloyd, a dour, solitary man is nevertheless a thoroughly dedicated union organizer. In fact, he has given up on his thoughts of becoming a doctor in order to organize the mines. Rondal’s life at once reminds a reader of the countless intelligent and promising humans whose dreams are swallowed up by a difficult working class life and of those courageous workers who fight for justice and dignity on behalf of others.

Rosa Angelelli, a Sicilian immigrant brought to West Virginia by her husband Mario, voices a number of short sections in the novel. Desperately homesick, she works as a housekeeper for a wealthy mine operator whose butterfly collection both intrigues and troubles her. Rosa suffers tremendous loss because of the mine, and her fate as depicted by Giardina is genuinely heartbreaking.

Carrie Bishop, whose home is in Kentucky, is a bold and free-thinking girl who as a woman becomes a nurse in a mining town, and she comes to dominate the novel with her compelling voice and story. Hopelessly in love with Rondal Lloyd, and appalled at what she sees of the miners’ conditions, she joins the dangerous, clandestine struggle to bring the United Mine Workers to Justice County. Carrie’s brother Miles, however, has become a representative of “the operators,” which confronts Carrie with conflicting loyalties and hard decisions.

Other notable characters in the novel include Talcott Lloyd, Rondal’s younger brother, who has fought in the Great War and become desensitized to violence, and Isom Justice, scion to Annadel’s wealthiest citizen, is an especially intriguing creation of Giardina’s. Not a miner himself, Isom nevertheless participates in the miners’ cause as a kind of adventure and comes to represent a certain type of middle class activist, individualistic and lacking in political principle and discipline. Albion Freeman, who loves and marries Carrie, is a gentle Hardshell Baptist preacher who does not believe in hell.

Storming Heaven is also peopled by the multi-ethnic miners, the blacks, Italians, Irish, Hungarians and Poles who live in their own impoverished enclaves and look askance at each other until the union movement brings them together, enlightening many of them. Finally, there are the “gun thugs,” the Baldwin-Felts Detective Agency goons brought in by the operators to put down the miners’ attempts to organize. True to history, the Baldwin-Felts men in the novel beat, torture and murder suspected organizers. At one point a socialist organizer is thrown into an oven.

Giardina’s narrators, with the exception of Rosa, are highly reliable, Carrie, Rondal and C.J. each being particularly clear-eyed, honest and self-aware. While the novel might sacrifice something in the way of ironic complexity with such narrators, it gains more. The three speak straight and plain, and Giardina speaking through them allows no trace of sentimentality into these hard lives. Love is unpredictable, stubborn and inconvenient as well as beautiful. Fear and spite are given their due, and the thirst for justice is a burning, immediate need.

Logan County Sheriff’s deputies during the battle of Blair Mountain

Giardina also has a keen eye for observation and an excellent writer’s touch. Here is a passage from Carrie, describing Justice town where she goes to nursing school:

In Justice town, the houses stabbed pillars of stone and wood into the flesh of the hillside and clung there like a swarm of mosquitoes.

With such crystalline sentences she shows us mining towns and verdant hills, one-room homes, coal tipples, box cars and flat cars and the simple dress of the mining families. One element almost absent from Storming Heaven, however, is the mines themselves. We go down in a mine only twice, early in the novel and briefly each time. Nevertheless, Giardina shows us enough in these scenes to establish vividly the inhuman conditions and mortal danger of the work.

Realizing that any hopes they have of improving their lot will depend on their forcing the coal operators to back down, the miners begin to arm themselves. Led by C.J. Marcum and Doc Booker, a contingent of deputized miners declare their town “Free Annadel.” When Baldwin-Felts gun thugs arrive on the train, Isom Justice, who has been made chief of police, attempts to arrest them. What ensues is Giardina’s fictionalized treatment of the 1920 Matewan Massacre. In Storming Heaven, as in the actual event, two brothers of the co-founder of the agency, Thomas Felts, are killed. One was shot by the actual police chief, Sid Hatfield, who became a hero among mining families.

The miners strike and are immediately turned out of their homes. Scabs are brought in to work the mines, and the striking miners set up a tent city. Giardina conveys the boredom, frustration and discomfort of life in the tents, and with the coming of winter she portrays the horror the miners endured.

What dominated the march on Logan was a spirit of class solidarity, regardless of race or nationality. They marched wearing red bandanas tied around their necks to distinguish themselves from the gun thugs, who tied white handkerchiefs to their arms. The red bandanas, no doubt associated in the minds of the miners and mine owners with revolution and socialism, ironically became the source of the term “redneck,” later used to disparage Appalachian workers as ignorant and backward.

Giardina is careful to portray the leading role socialists played in organizing the miners, though she does not discriminate among those in the novel who call themselves socialists where such discrimination would be useful. For instance, some who identified themselves as socialists among the West Virginia miners in fact subscribed to a nationalism that supported the US intervention in World War I. Then as now, the term “socialism” tended to be eclectically used and abused.

Nonetheless, from Doc Booker to C.J. and Rondal, it is the socialists in the novel who take the initiative in the struggle to organize the miners. A point Giardina seems to want to emphasize is that the miners in the Coal Wars of the early 20th century were both militant and class-conscious.

Ultimately, the miners were defeated, both because Sheriff Chafin had planes drop bombs of explosives and poison gas left over from World War I on the miners and because President Warren G. Harding sent in federal troops. At the end of the novel, characters are left with a sense of waiting for a day that has still not arrived.

At 35, as a picture of the ferocity of the class struggle in the US, Storming Heaven is as compelling as ever. In Alabama, miners at Warrior Met have been on strike for 11 months for better wages and work schedules. The miners belong to the United Mine Workers of America, the same union the miners at Blair Mountain fought and died to join a hundred years ago. Today, the UMWA, with only a fraction of its former membership, is an extension of the company and the government, operating to prevent strikes and, when workers’ determination makes strikes impossible to prevent, as in the case at Warrior Met, to isolate and sabotage them.

Denise Giardina, an American Book Award winner, was born in Bluefield, West Virginia in 1951 and grew up in a small coal mining town in McDowell County. She attended West Virginia Wesleyan College and the Virginia Theological Seminary. According to the West Virginia Encyclopedia, she “is an ordained deacon in the Episcopal Church.”

Storming Heaven was her second novel, and it was followed by another set in the coalfields, Unquiet Earth (1992), which treats the period from the 1930s to the 1990s.

The West Virginia Encyclopedia also describes Giardina as “a political activist” who “participated in and wrote about Appalachian labor-capital conflicts of her day, including the A.T. Massey (mid-1980s) and Pittston (1989–90) coal strikes.” In 2000, she ran for governor of West Virginia as the candidate of the Mountain Party, the state’s affiliate of the national Green Party, highlighting environmental issues in particular. She was also once a campaign volunteer and Congressional aide for Democratic Rep. Bob Wise (later West Virginia governor).

Mass picket of coal miners during the A.T. Massey strike of 1984-85 — UMWA president Trichard Trumka’s betrayal of this strike paved the way for a wave of union-busting and state violence against the miners.

Both the AT Massey and Pittston strikes were sold out by the UMWA. In the former strike, five miners were framed up and sentenced to decades in prison. In 2010, the WSWS noted that the union’s betrayal of the A.T. Massey strike “set the stage for a wave of violent union-busting, frameups and the murders of militant miners over the next decade. Time and time again, from the 1989 Pittston strike, to the frame-up of the Milburn miners, to the 1990 murder of former A.T. Massey miner John McCoy, to the 1994 frameup of striker Jerry Dale Lowe, the pattern was the same—the UMWA left its members defenseless and collaborated with management and the state authorities against them.”

Giardina’s novel is artistically and socially valuable and moving as a presentation of the class struggle in the early 20th century. Readers of Storming Heaven will be drawn into the lives of the characters and inspired by the courage of the miners. They must look up from the book, though, and see that the unions that coal miners and others fought to build in the early 20th century no longer exist as workers’ organizations.

Moreover, the crisis of American and global capitalism is profound and systemic, demanding new types of organization and a socialist and internationalist perspective. If the novel’s rose-colored view of militant trade unionism and elemental solidarity was made into a program and applied to present conditions, it would prove wholly inadequate.